Jean-Baptiste André continues to research the body, the topic of identity, and the notion of metamorphosis in his new work, comme en plein jour (as in full day). Jean-Baptiste is fascinated by the metamorphosis figure and how the body, in a wide and clear space, can create shapes and form. This diptych to 2004’s Interieur Nuit is powered by an electronic score, where circus, dance, and video art meet in a world of uncertain identity, shifting color, startling landscapes, and skewed perspective.

Jean-Baptiste has recently been working as the artist-in-residence at the Yamaguchi Center for the Arts and Media in Japan. He has been working with musician Aoki Takamasa and videographer Noriko Matsumoto to investigate the connections between dance, camera, music, and technology. André has also been working with noted multi-media installation artist Robin Rhode on a work on video titled “The Storyteller.”

The exhibit is also sponsored by the Cultural Services of the French Embassy and the French Consulate of Houston.

The Texan-French Alliance for the Arts and its presenting partner, The Levant Foundation, are proud to  sponsor Jean Luc Mylayne, the first solo exhibition of the French photographer in an American museum.

The exhibition, on view at Blaffer Gallery, the Art Museum of the University of Houston from September 8 through November 10, presents portraits of bluebirds, hummingbirds, juncos, and other species of birds in the habitat of Western Texas. A constant theme of the show is the reflection of the relationship between humanity and nature.

In collaboration with the University of Houston Downtown and Musiques de Nuit, Bordeaux.

Sponsorship by TFAA and its presenting partner Technip USA

The two free concerts are:

11 am on the Outdoor Stage at Kemah Boardwalk

Next to the Flying Dutchman Restaurant

Sponsorship by TFAA and the Cultural Services of the French Embassy

HOUSTON, May 18, 2007 — A MODERN PATRONAGE: de Menil Gifts to American and European Museums continues the Menil’s celebration of its 20th anniversary.

Organized by Menil director Josef Helfenstein, this exhibition brings together for the first time approximately 45 major works of art that John and Dominique de Menil donated to museums in Europe and America, including the Centre Georges Pompidou, Paris; Musée du quai Branly, Paris (formerly the L’Musée del Homme); the Museum of Modern Art, New York (MoMA); the Museum of Fine Arts, Houston (MFAH); as well as The Menil Collection (which opened to the public on June 8, 1987).

“We feel very close to the Museum of Modern Art, and we like to give you the kind of things in which we believe,” John de Menil wrote in December 1955 to Alfred H. Barr, Jr., founding director of MoMA. The letter accompanied one of the de Menils’ first gifts to a museum in December 1955 — and set the stage for many subsequent decades of generosity. De Menil’s words revealed his deep belief in the power of the primacy of art, a philosophy of intuitive collecting and giving that he shared with Dominique (1908-1997). A MODERN PATRONAGE is more than a reunion of works of art or homage to their donors. In planning the exhibition, said Josef Helfenstein, “a fascinating story emerged. Bringing together pieces of the puzzle provided an opportunity to understand the philosophy that guided the de Menils’ approach to patronage. I hope this exhibition helps to illustrate that the Menil embodies the founders’ open-door approach to thinking about the possibilities of art.”

Accompanying the exhibition is a fully illustrated catalogue, with essays by Marcia Brennan, Alfred Pacquement, and Ann Temkin, exploring the complex set of circumstances that inspired the development and international reach of the de Menils’ artistic vision. Pacquement, the director of the Centre Pompidou, Paris, discusses Dominique de Menil’s pioneering role in bringing modern American Art to France in the 1970s.

In honor of her late husband, Dominique gave to the Pompidou at its 1977 inauguration a monumental Abstract Expressionist work by Jackson Pollock, The Deep (1953). Atypical of Pollock’s well-known drip paintings, with the work features a central composition that verges on the figural, its the unique and dramatic nature of the work led leading MoMA curator Frank O’Hara to describe the painting as “a work which contemporary aesthetic had cried out for … one of the provocative images of our time, an abyss of glamour encroached upon by a flood of innocence.”

The couple’s belief in individuals and objects vision led them to make deep their commitments to particular artists, including, famously, Surrealists such as Magritte and Ernst, and Jean Tinguely. Visiting the Swiss sculptor’s 1964 show at Alexandre Iolas’s Paris gallery, John was so inspired by what he saw, and heard — a cacophonous gathering of spurting and rocking machines consisting of rubber belts and electric motors — that he purchased every work on display for the MFAH. A selection of these Meta-Mecanique sculptures will be assembled for A MODERN PATRONAGE.

Demonstrating a truly modern patronage, the de Menils’ role as collectors transcends the works of art held by The Menil Collection, and this exhibition honors their international scope and presence. 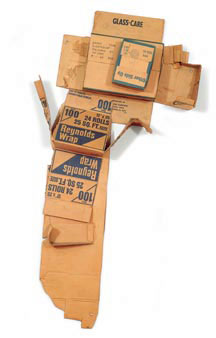